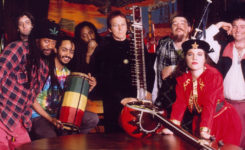 Too many goodies to list! We’re thrilled to dive into this epic release full of masters and visionaries. Some favorites…

Nothing Lasts But Nothing Is Lost was the 3rd installation of the Shpongle epic released in 2005 on Twisted Records.…

Spiral Roots is a connection between organic sounds and mystical vibes. Roots connecting us with our home – Earth, spirals…